Inside Microsoft’s new custom Surface processors with AMD and Qualcomm

Inside Microsoft’s new custom Surface processors with AMD and Qualcomm

Surface Ryzen Edition and SQ1 processors have been co-engineered

Microsoft has just announced its new Surface Laptop 3 and Surface Pro X devices, and neither will come with an Intel processor. The software giant is diversifying its silicon for Surface this year by partnering closely with AMD and Qualcomm, respectively, to create custom processors for its Surface line.

On the AMD side, this Ryzen processor will be available exclusively in the 15-inch model of the Surface Laptop 3, a notebook that also has a metal finish instead of the fabric we’ve seen on previous Surface Laptop models. Microsoft has worked closely with AMD to add an additional graphics core on the 12nm Ryzen 5 and Ryzen 7 Surface parts that are built on Zen+, and to optimize the chip to fit inside the slim-and-light chassis it uses for the Surface Laptop 3. 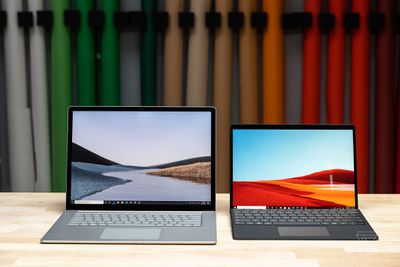 “Several years ago we met with Pavan Davuluri and Panos Panay, and we had a shared vision with Microsoft to reinvent the laptop and essentially create the best laptop in the world,” explains Jack Huynh, general manager of AMD’s semi-custom group, in an interview with The Verge. “We literally spent tens of thousands of hours of co-development and co-engineering hand-in-hand with Microsoft not just optimizing the CPU and GPU, but also the overall system power management, pen, touch, memory bandwidth, firmware, and drivers to deliver the highest graphics laptop performance ever in a very thin and light form factor.”

At times, this has meant engineers from AMD and Microsoft both working in the same buildings, all trying to get a Surface Laptop with AMD parts to live up to the Surface brand. AMD isn’t exactly a popular choice for laptop makers to pick these days, and Microsoft has worked closely with the company on a custom Ryzen variant to ensure it all goes smoothly.

“This work we did with the hardware team, the software team, and the silicon team allowed us to deliver AMD’s best marketed CPU performance in this form factor,” explains Pavan Davuluri, a Microsoft Surface engineer, in an interview with The Verge. “The reason we built the Ryzen AMD part was to be able to make sure we had best in class GPU performance in that same power and performance footprint that we’ve traditionally built the Surface Laptops on.” 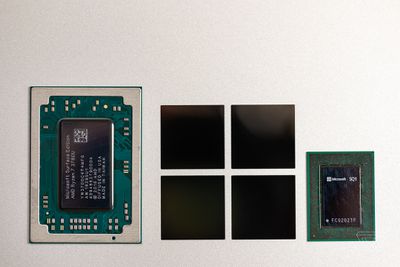 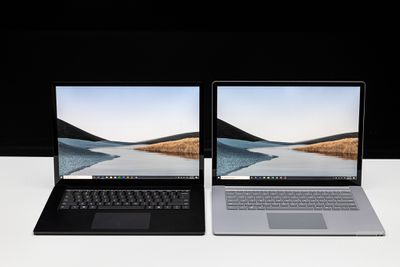 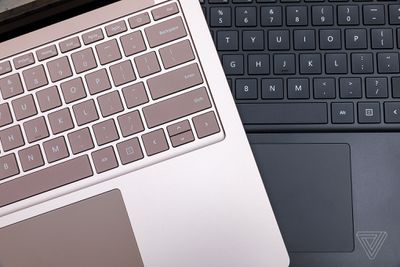 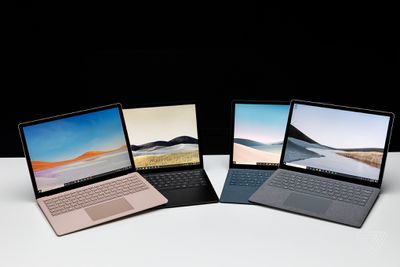 It also doesn’t mean the Surface Book is going away. “Across the board, Surface Book laptops are GPU-heavy and I think in the future you’ll see us continue to do more of that,” explains Davuluri. “This is us setting the bar for what the integrated graphics performance should be, but for sure you should expect the Surface Book experience to be better.”

What Microsoft’s work with AMD means in terms of raw power is around 1.2 teraflops performance at peak, which is the equivalent of an Xbox One. This power is more geared toward creator tasks, like video editing and photo processing, but it should also be able to power some recent games at lower resolutions and settings. We’ll need to test it fully to find out what it’s really capable of, with the extra cores over similar Ryzen chips, and whether Microsoft and AMD have really nailed battery life here. The promise is all-day battery life, but we’ll definitely need to see how that plays out in reality.

Microsoft’s second significant silicon partnership is with Qualcomm. We’ve seen Microsoft dip its toe into ARM-powered Surface devices before with the Surface RT and Surface 2, but those products never really had the performance or app compatibility to match the Pro line of Intel-powered Surfaces. Microsoft is using a custom variant of Qualcomm’s Snapdragon 8cx in its Surface Pro X, and it’s boldly using the Surface Pro moniker on this particular device.

“At the time when we conceived the Surface Pro X, several years ago, there was no available silicon that could give us the performance we wanted with the power we wanted and the form factor we wanted,” explains Davuluri. Intel has struggled to get its chips into form factors that can compete with devices like the iPad Pro, and Microsoft has now looked elsewhere to bring a true next-generation Surface Pro to life. 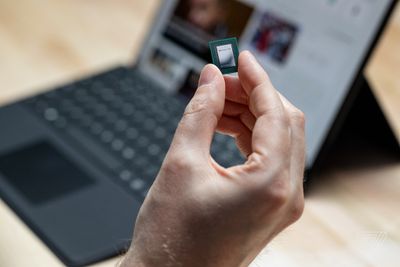 Microsoft has built a custom 7nm SQ1 processor with Qualcomm, and it’s focused on improving both the CPU and GPU power over a regular Snapdragon 8cx. “Microsoft SQ1 brings the best CPU performance for Windows on Snapdragon devices,” reveals Davuluri. “It’s an octa-core processor, and it has the first and fastest ever Kryo CPU at 3GHz. These Kryo cores are also for Windows to balance the cores between high performance cores and energy efficient cores, and of course these energy efficient cores are great for background tasks which in turn contributes to fundamentally redesigning the platform for great battery life.”

The GPU performance itself is 2.1 teraflops, which is surprisingly good for this type of thin-and-light device. However, Windows on ARM devices aren’t the types of hardware you’ll be doing much gaming on, particularly as OpenGL games aren’t even supported, and you might find yourself running a lot of traditional apps that are emulated in this ARM world. The GPU power is really there for emerging web experiences, future workloads, and even being able to power multiple 4K displays over a single USB-C cable. Perhaps we’ll eventually see native ARM versions of Adobe’s popular apps that can really take advantage of the GPU.

“As the world switches from traditional apps to a lot of scripted applications and web engines, we’re finding workloads for web render can be a significant consumption of GPU capability,” explains Davuluri. “It’s to really think of Surface Pro X as a device that enables future workloads… for apps and services that haven’t been conceived today.”

Some of those workloads will include artificial intelligence or machine learning tasks, and it’s something we’ll be hearing more about with Windows on ARM in the future. In terms of real-world performance, this could finally be a turning point for Qualcomm with Windows. App compatibility will still be shaky with apps that integrate into the Windows shell-like Dropbox, but Chromium is now being compiled natively for ARM and Microsoft is working on its own Edge browser that will be powered by Chromium. That’s a big change from the browser experience we’ve had before on Windows on ARM devices. 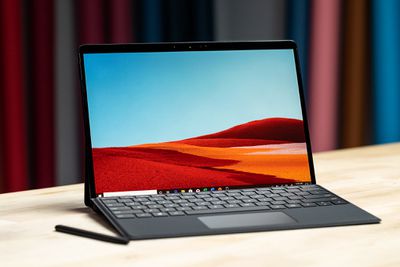 “We built this compute platform together and we’ve worked with Microsoft to create this custom experience and solution for the Surface Pro X,” says Miguel Nunes, head of mobile compute products at Qualcomm, in an interview with The Verge. While Microsoft and Qualcomm have worked closely on the SQ1, the specific graphics capabilities will be exclusive to Microsoft and the SQ1 won’t be available to OEMs. “We’re working on enabling a lot of these capabilities for the industry, but the work specific on SQ1 is for the Surface Pro X,” reveals Nunes.

Microsoft and Qualcomm are both promising “PC-class performance” for the Surface Pro X, and if it delivers something close to what we see with the regular Surface Pro then it could be a viable option for many. “For us to be able to do this, we’ve had to redesign the entire SoC and even the tools you associate with the SoC itself with Qualcomm,” reveals Davuluri. “We’ve redesigned the entire platform to perform at 7 watts, with scalable bust performance up to 15 watts.”

Especially with built-in LTE connectivity and all-day battery life, with a 13-inch display in a 12-inch chassis. The risk here for Microsoft is using the “Surface Pro” moniker and not having the performance and apps to back it up, and that’s something that it will have to lean on software developers to really improve.

While previous Windows on ARM efforts have fallen a little flat, Microsoft’s backing with its own Surface hardware is a significant boost to Qualcomm’s plans for always-connected laptops. We’ve been waiting on a truly interesting Windows on ARM device, and the Surface Pro X looks like it could kick off a new era of ARM-powered Windows laptops.

Another day, another Pixel 4 leak. After a veritable deluge of feature reveals, in
Read more...